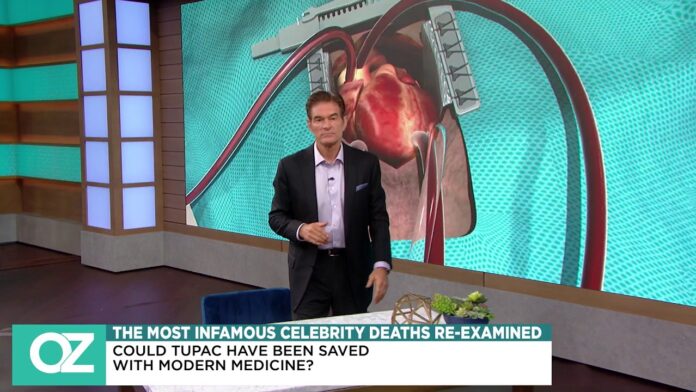 Dr. Oz On Tupac’s Autopsy The Whole Thing Is Rather Strange (Video)

Many theories exist when it comes to Tupac Shakur and his death. Some go as far as believing Tupac is still alive. Adding to that belief was perhaps Dr. Oz on a special episode of the “Dr. Oz Show“.

Till this day, twenty plus years later, Tupac Shakur remains a topic for discussion. His demise has been well documented, but yet unsolved. Even though many feel they have all the evidence needed, while others believe he is still alive living in Cuba. (The Fans Think That Tupac Is Still Alive)

Just like Tupac’s murder case, Biggie‘s is still spoken about till this day. Many trying to connect the dots, and still can’t believe there has been no arrests, for the two murder cases.

On an special episode on the Dr. Oz show, reporter Michael Yo and forensic criminologist Laura Pettler, discussed the unsolved murders of both Tupac and Biggie.

During the episode, Dr.Oz looks into the two fatal nights on this special segment titled ‘Anatomy Of A Scandal’. Most notably was the mystery behind the Tupac autopsy.

When it came to Tupac’s case, Dr. Oz couldn’t look into things as far as he would have liked. Why? Well. because his team could not obtain an autopsy. “When it comes to Tupac no autopsy has been released. I’ll say it again, there is no autopsy for us to look at. My team tried to obtain it, we couldn’t,” explains Dr. Oz.

“To me I gotta say, it’s sorta strange, he died six days after gunshot wounds. Usually, you shot, you stop the bleeding, and then that’s it. In his case, I’m being told, indirectly, he bled but later. So, the whole thing is a bit strange.”

Biggie’s autopsy on the other hand is available. Biggie‘s autopsy files consist of various images showing the gunshot wounds. Biggie died within an hour after being shot on March 9th 1997. After leaving an after party hosted by Vibe Magazine and Qwest Records, he would be shot in his SUV.